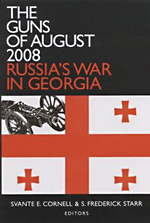 The Guns Of August 2008: Russias War In Georgia, 1st Edition

In the summer of 2008, a conflict that appeared to have begun in the breakaway Georgian territory of South Ossetia rapidly escalated to become the most significant crisis in European security in a decade. The implications of the Russian Georgian war will be understood differently depending on one's narrative of what transpired and perspective on the broader context. This book is designed to present the facts about the events of August 2008 along with comprehensive coverage of the background to those events. It brings together a wealth of expertise on the South Caucasus and Russian foreign policy, with contributions by Russian, Georgian, European, and American experts on the region.

Front Cover.
Half Title Page.
The Guns of August 2008: Russia’s War in Georgia.
Studies of Central Asia and the Caucasus.
Title Page.
Copyright Page.
Contents.
List of Tables and Illustrative Materials.
List of Acronyms.
Maps.
Other Frontmatter.
Acknowledgments.
Photo Credits.
1: Introduction.
2: The Paradox of Living in Paradise: Georgia’s Descent into Chaos.
3: Georgian-Russian Relations in the 1990s.
4: The Russian Leadership’s Preparation for War, 1999–2008.
5: Georgia’s Rose Revolution: The Break with the Past.
6: From Neglect to Duress: The West and the Georgian Crisis Before the 2008 War.
7: The Saakashvili Administration’s Reaction to Russian Policies Before the 2008 War.
8: From Sukhumi to Tskhinvali: The Path to War in Georgia.
9: After August 7: The Escalation of the Russia-Georgia War.
10: Defining Victory and Defeat: The Information War between Russia and Georgia.
11: The Implications of the Russia-Georgia War for European Security.
Notes.
Contributors.
Index.