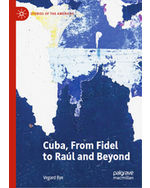 
Cuba, From Fidel to Raúl and Beyond, 1st Edition

This book analyzes the economic reforms and political adjustments that took place in Cuba during the era of Raúl Castro's leadership and its immediate aftermath, the first year of his successor, Miguel Díaz-Canel. Faced with economic challenges and a political crisis of legitimacy now that the Castro brothers are no longer in power, the Cuban Revolution finds itself at another critical juncture, confronted with the loss of Latin American allies and a more hostile and implacable US administration. The book analyzes the formal end of the Castro era in April 2018 in Cuban politics; describes the special character of the Cuban Revolution and its international significance far beyond the size of the small island state; and examines the formidable challenges left to the new generation of leaders, including a deep economic crisis and a political crisis of legitimacy.