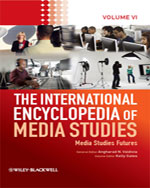 Truly global in scope and covering a diverse range of topics, The International Encyclopedia of Media Studies provides the definitive resource for students, scholars, and faculty in this rapidly evolving and dynamically complex field. The Encyclopedia brings together cutting-edge scholarship from over 200 contributors, arranged thematically across 6 volumes edited by an international team of the world's best scholars and teachers.  The volumes explore the history and foundations of the field; production; content and representation; audience and interpretation; media effects and cognition; and the future of the field. Each opens with an accessible introduction that also serves as a stand-alone overview of the particular theme. Reflecting the diversity of the field, the full breadth of Media Studies quantitative and qualitative methodologies is covered within these 175 essays, including the important contributions made by the social scientific paradigm in terms of effects and cognition; humanistic and historical approaches; and the Political Economic paradigm.  Rather than pitting these approaches against each other, the encyclopedia includes them in productive conversation with each other and creates a new dimension of understanding. Chapters offer in-depth explorations of the historical background and recent developments, problems and challenges, and future opportunities for research that have evolved within the discipline. The Encyclopediais also available online on Wiley Online Library, offering you 24/7 access, downloadable chapters, and powerful browsing and searching functionality. Visit www.encyclopediaofmediastudies.com.