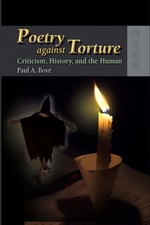 Poetry against Torture sets out the clear conflict between two competing conceptions of society and civilization. Poetry represents one: the fundamental human capacity to make itself and its societies in ways that will produce the most nearly perfect form of the species.

Torture represents the other - especially state torture - as that which fears the human capacity to evolve, to create alternative futures for itself, and to assume increasingly capacious and democratic responsibility for the justice and joy of its own being.

Front Cover.
Half Title Page.
Title Page.
Copyright Page.
Contents.
Acknowledgements.
Preface.
1: Vico and Philological Criticism.
2: Philology and Poetry, The Case against Descartes.
3: Erich Auerbach and Invention of Man.
4: John Stuart Mill, On Liberty and Criticism.
5: John Stuart Mill and the Limits of Self-Making.
6: Michel Foucault and the Critical Care of the Self.
7: William Empson and the Mind: Poetry, Torture, and Civilization.
Notes.
Index.