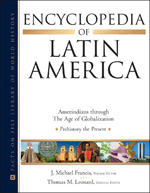 Authoritative yet accessible, the four-volume ENCYCLOPEDIA OF LATIN AMERICA covers the history and culture of Central America, South America, and the Caribbean from early settlements to the present day. Each volume focuses on a specific time period in the area's development. The first volume explores prehistory through the achievements of the Incas in the 16th century, and the second volume covers the arrival of the Spanish, colonization, and independence movements until the 1820s. Volume III examines Latin America's search for its own identity from the middle of the 19th century to the start of the 20th, and the fourth volume focuses on Latin America as it asserts itself in international politics, experiences the effects of globalization, and becomes an influential area worldwide, from the 20th century through the present day.