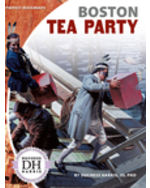 The Boston Tea Party marked the beginning of the American colonies’ break from British rule and would go on to inspire future protest movements. This book reveals why British laws prompted the event, how it led to the American Revolutionary War, and what later movements borrowed from the colonist’s protest. Easy-to-read text, vivid images, and helpful back matter give readers a clear look at this subject. Features include a table of contents, infographics, a glossary, additional resources, and an index. Aligned to Common Core Standards and correlated to state standards.