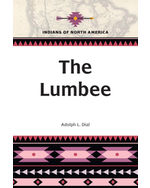 The Lumbee, part of the Indians of North America series, presents a fascinating portrayal of the history and culture of these native people. The Lumbee migrated from the Atlantic Coast to present-day Robeson County in North Carolina in about 1650. Most Lumbee believe they are descendants of the lost English colonists of Roanoke Island and of the Hatteras Indians, and the tribe adapted quickly to European methods of dress, agriculture, and architecture. For many years white settlers treated the Lumbee as virtual equals. However, the tribe's legal, social, and economic status began to decline with the imposition of new racial codes by white southerners. Through education and political activity, the Lumbee have claimed an ever-increasing degree of self-determination, yet their struggle for identity continues.

Front Cover.
Copyright Page.
Chapters.
1: Who Are the Lumbee?.
2: Establishing an Identity.
3: The Lowrie War.
4: Mind and Spirit.
5: A Living from the Land.
6: Making the Future.
Support Materials.
Bibliography.