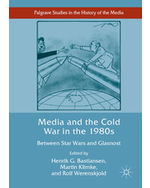 
Media and the Cold War in the 1980s: Between Star Wars and Glasnost, 1st Edition

The Cold War was a media phenomenon. It was a daily cultural political struggle for the hearts and minds of ordinary people—and for government leaders, a struggle to undermine their enemies' ability to control the domestic public sphere. This collection examines how this struggle played out on screen, radio, and in print from the late 1970s through the early 1990s, a time when breaking news stories such as Ronald Reagan's Star Wars program and Mikhail Gorbachev's policy of glasnost captured the world's attention. Ranging from the United States to the Soviet Union and China, these essays cover photojournalism on both sides of the Iron Curtain, Polish punk, Norwegian film, Soviet magazines, and more, concluding with a contribution from Stuart Franklin, one of the creators of the iconic Tank Man image during the Tiananmen Square protests. By investigating an array of media actors and networks, as well as narrative and visual frames on a local and transnational level, this volume lays the groundwork for writing media into the history of the late Cold War. It explores how various forms of media engaged with the Cold War within Europe and beyond, including popular culture, audiovisual representations, photography, as well as artistic performances; investigates the complex interrelations between the media and competing political, economic, and cultural elites; provides insight into the use of media and communication systems and products as a political tool on a domestic and international level; and seeks to explain the role of grassroots politics in the formation of public opinion.