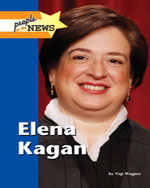 The nomination and appointment of Elena Kagan to the U.S. Supreme Court in 2010 offered few clues to her likely role within the Court. There was no judicial record of previous decisions on controversial issues because Kagan had no judicial experience, making her the only member of the current Court who had never been a judge. There was also very little indication of her personal views because Kagan prefers to keep her private life private. A closer look at Kagan's life and career, however, reveals a very smart, likeable, hard-working and accomplished woman with a reasoned approach to legal questions and a remarkable ability to bring together people with deeply held, conflicting views -- an especially important skill on the closely-divided Supreme Court. This book chronicles the life of Elena Kagan, including a number of key events: her childhood, schooling, public service, years as a professor, positions as Dean of Harvard Law School and Solicitor General, appointment to the Supreme Court, her role in important court decisions, and other related topics. Special care is taken to explain the purpose and daily activities of SCOTUS and Kagan’s responsibilities as its newest judge.