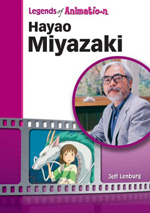 Hayao Miyazaki is one of the world's most respected Japanese animation filmmakers. He is known for creating compelling characters, engaging stories, and breathtaking animation, all of which have earned him international acclaim while setting box-office records. Miyazaki, who began his career in 1963 as an in-betweener for Toei Douga studio, soon found his true calling as an anime and manga artist, working on classic Japanese features and television series and writing the best-selling manga, Nausicaä of the Valley of the Wind. In 1985, he cofounded Studio Ghibli, and in 1989, wrote and produced its breakthrough hit animated feature, Kiki's Delivery Service. Since then, Miyazaki has directed some of the most successful and popular anime features of all time, including Howl's Moving Castle, Princess Mononoke, Ponyo, and Spirited Away, entertaining audiences around the world and raising the bar for the art of animation. Follow the career and animation innovations of Japan's Emperor of Anime in Hayao Miyazaki.