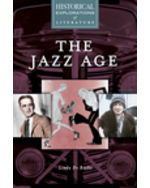 The Jazz Age: A Historical Exploration of Literature, 1st Edition

This one-stop reference to the "Jazz Age"—the period that began after the First World War and ended with the stock market crash of 1929—digs into the cultural, historical, and literary contexts of the era. Author Linda De Roche examines the writing of the time to look beyond the common conceptions of the Roaring Twenties and instead reflect on the era's complexities and contradictions, including how gender and race influenced social mores. The book profiles key American literature of the time, including F. Scott Fitzgerald's The Great Gatsby, Ernest Hemingway's The Sun Also Rises, Sinclair Lewis's Babbit, Anita Loos's Gentlemen Prefer Blondes, and Nella Larsen's Passing. Filled with essays that offer historical explorations of each work as well as suggested learning activities, chapters also feature study questions, primary source documents, and chronologies. Support materials include activities, lesson plans, discussion questions, topics for further research, and suggested readings.