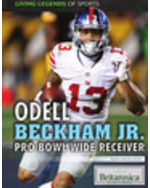 Odell Beckham Jr. has put together some remarkable numbers to start his National Football League (NFL) career. The son of two Louisiana State University athletes, Beckham's athletic abilities and hard work on the football field have translated into enormous success. From his unbelievable catches to big time showdowns against some of the NFL's best defenders, Beckham has made a name for himself with the New York Giants. This biography explores the controversial and extraordinary story of Beckham's life, from his famous one-handed catch on Sunday Night Football in 2014 to his troubled perception on and off the field.