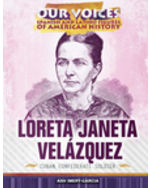 Lieutenant Harry T. Buford was a respected Confederate soldier who fought in four major battles during the Civil War and later became a double agent spying for the Southern cause. However, Lieutenant Buford was actually Loreta Janeta Velazquez! Velazquez was a Cuban woman living in New Orleans, who disguised herself as a man in order to experience freedoms otherwise unattainable to her. This captivating book explores her unconventional life as a soldier, a spy, and a Latina in the American South who lived life on her own terms.

Front Cover.
Title Page.
Dedication.
Copyright Page.
Contents.
Introduction.
1: A Woman on Her Own Terms.
2: A Woman in Male Costume Is a Man.
3: Fighting for the Southern Cause.
4: Disillusionment with the War.
Timeline.
Glossary.
For More Information.
For Further Reading.
Bibliography.
Index.
About the Author.
Photo Credits.