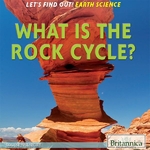 What Is the Rock Cycle?, 1st Edition

Although rocks may initially seem like solid, unchanging substances, they are actually made up of minerals that change forms and get recycled through many different stages. This engaging book explores the rock cycle with diagrams and detailed photographs illustrating the movement of rocks through their various states, including magma-formed igneous rock, metamorphic rock such as marble, and layered sedimentary rocks that build up over time. Also covered are the scientific processes that cause rocks to change forms and the ways in which humans have benefitted from rock’s surprising and constant transformations.