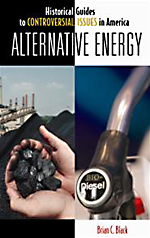 It is the topic that made Al Gore a media star and a keynote of the Obama administration’s blueprint for change. And it is critical to our planet’s future. Differing opinions on the best course of action abound, creating a confusing landscape for those who seek to understand and act. As this book makes clear, civilization cannot long continue to ride on an oil slick. Worldwide, many people have come to see dependence on coal, and especially on oil, not only as unsustainable, but as profoundly destabilizing, both environmentally and politically. While ever-increasing demands continue to be placed on "mainstream" energy sources, recurring attempts have been made to generate power in "alternative" ways.

After retracing some of these efforts, this succinct and historically informed volume explores the ongoing debate over alternative energy that gathered strength in the 20th century, showing how that debate mirrors larger attitudes toward energy and consumption. Like other volumes in this series, Alternative Energy is designed to provide material for student reports and debate arguments. It is an outstanding sourcebook for those interested in investigating the problems and prospects of alternative fuels.