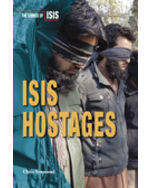 In August 2014, ISIS surged onto the global stage with the horrific killing of a journalist who had been held hostage by the group. The gruesome video was followed by several others as ISIS sought to capture and maintain the attention of the world media and encourage recruits to join them. ISIS's treatment of hostages has led some to take their own lives instead of being captured. But not all hostages are equal under the Islamic State. This book will explore to role of hostages under ISIS, from those who are killed or forced to fight to those who are used for their value as propaganda or their ability to generate income, in the form of bribes, for the Islamic State.