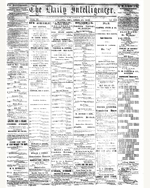 In "Four Years in Rebel Capitals: An Inside View of Life in the Southern Confederacy from Birth to Death", one of the finest memoirs of the era, journalist T. C. DeLeon wrote that the South's best wartime newspapers boasted the thinking of some of the sharpest minds in the region. Their pages “recorded the real and true history of public opinion during the war. In their columns is to be found the only really correct and indicative 'map of busy life, its fluctuations and its vast concerns' in the South, during her days of darkness and of trial.” DeLeon's words underscore the basic truth that Civil War America was a newspaper culture. When the war broke out in 1861, the South produced hundreds of newspapers. Every town of any size boasted at least a weekly paper. Two years into the war, attrition had substantially decreased this number. By mid-1864, the number of pro-Confederate newspapers decreased dramatically; found only in the major Southern cities. The causes of decline were numerous. Like men in other occupations, editors, printers, and their employees joined the army, creating a severe labor shortage. Then, as the conflict lengthened, the cost of newsprint, lead typeface, glue, and other supplies spiraled out of control, making it harder to stay in business. Union occupation of swaths of the South closed still more papers or converted them into Union organs. Following the end of the war, the remaining pro-Confederate newspapers ceased publication or returned to reporting on state and local issues.