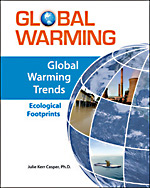 Climate scientists have repeatedly told us that the 1990s had the warmest temperatures ever recorded since records were consistently kept in the mid-1800s. Scientists worldwide support this notion, and there is an abundance of data collected to prove its validity. Some argue that the trend has not been a steady upward climb and that it has had intermittent cooling periods. Although these intervals have occurred every few decades in some locations, the overall tendency has been a steady upward climb, coinciding with melting glaciers, rising sea levels, shifting climatic zones, and changing ecosystems worldwide.

Global Warming Trends presents an overview of significant climatic periods of the Earth's past and introduces the concept of climate proxies, or natural indicators that can be used to infer past climate. This accessible new book discusses the concept of geochronology and how scientists determine the relative ages of objects on Earth. It also examines how scientists use pollen, tree rings, plant remains, and other life forms to make inferences about past climatic conditions. Global Warming Trends concludes with the most current information from climate experts, exploring the futuristic role of computer modeling and how it is helping scientists discover the past in order to predict the future.