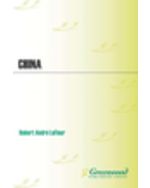 China is a country on the rise, with a rapidly growing economy and a student population of 320 million a number larger than the entire population of the United States. As the nation's economic strength, geopolitical importance, and cultural influence continue to grow, students and scholars as well as business people, travelers, and others are more interested than ever in investigating China's history, society, and way of life.

Packed with recent scholarship and fascinating details, this concise, multifaceted volume offers an updated look at China's geography and history, from the political and technological dominance of the imperial period to the communist revolution and the present state. The work also vividly captures China's economy, politics, and culture with extensive coverage of topics ranging from education, languages, arts, and cuisine to industrialization, gender issues, population control efforts, and human rights controversies that have impacted the country's relationship to the global community.