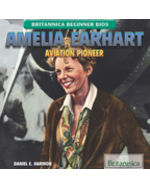 Amelia Earhart was queen of the skies at a time when airplanes dazzled the imagination. She was adventurous and daring. Earhart became the first woman pilot to cross the Atlantic Ocean, and she did it solo. She flew across the United States and returned, alone. She soloed halfway across the Pacific. She set many flying records but none of that satisfied Earhart. In May 1937, she and her navigator took off from California on her final, epic flight. Their destination: around the world. This action-packed biography for young readers includes Vocabulary and Quick Fact boxes.