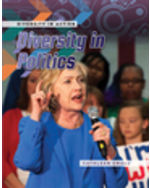 The ink on the U.S. Constitution had hardly enough time to dry before American politics got its start. America has come a long way since those first days, when white males dominated politics. This edifying volume highlights women in Congress and other high political positions as well as men and women from the LGBTQ+ community, such as Tammy Baldwin, the first openly gay U.S. senator. Readers will also learn about politicians holding office from various economic and social backgrounds, races, cultures, and abilities. For example, Congressman Markwayne Mullin of Oklahoma is one of only two Native Americans who have served in the 115th Congress.