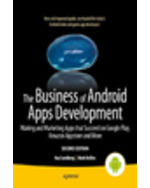 The growing but still evolving success of the Android platform has ushered in a second mobile technology "gold rush" for app developers.  Google Play and Amazon Appstore for Android apps has become the second go-to apps eco for today's app developers.  While not yet as large in terms of number of apps as iTunes, Google Play and Amazon Appstore have so many apps that it has become increasingly difficult for new apps to stand out in the crowd. Achieving consumer awareness and sales longevity for your Android app requires a lot of organization and some strategic planning. Written for today's Android apps developer or apps development shop, this new and improved book from Apress, The Business of Android Apps Development, Second Edition, tells you today's story on how to make money on Android apps.  This book shows you how to take your app from idea to design to development to distribution and marketing your app on Google Play or Amazon Appstore.  This book takes you step-by-step through cost-effective marketing, public relations and sales techniques that have proven successful for professional Android app creators and indie shops - perfect for independent developers on shoestring budgets.  It even shows you how to get interest from venture capitalists and how they view a successful app vs. the majority of so-so to unsuccessful apps in Android.  No prior business knowledge is required. This is the book you wish you had read before you launched your first app!

Front Cover.
Other Frontmatter.
Title Page.
Copyright Page.
Contents at a Glance.
Contents.
About the Authors.
About the Technical Reviewers.
Acknowledgments.
Introduction.
1: The Android Market: A Background.
2: Making Sure Your App Will Succeed.
3: Legal Issues: Better Safe than Sorry.
4: A Brief Introduction to Android Development.
5: Develop Apps like a Pro.
6: Making Money with Ads on Your Application.
7: In-App Billing: Putting a Store in Your Application.
8: Making App Marketplaces Work for You.
9: Getting the Word Out.
10: After You Have a User Base.
Index.