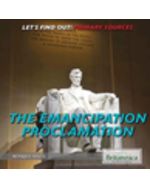 Though the Emancipation Proclamation is widely thought of as having brought an end to the despicable institution of slavery in the United States, the truth is a bit more complicated. The document actually freed slaves only in the lands in rebellion against the United States, so it had little immediate effect. That said, the proclamation did eventually free millions of people, enable African Americans to become Union soldiers, and make ending slavery one of the stated goals of the war. This volume explains how closely examining those sources gives us a better understanding of historical events and figures.

Front Cover.
Title Page.
Copyright Page.
Contents.
1: What Is a Primary Source?.
2: Slavery.
3: Slave Labor in the South.
4: Growing Tensions.
5: In Defense of Freedom.
6: Slave States and Free States.
7: A Nation at War with Itself.
8: Drafting the Emancipation Proclamation.
9: A Cause Worth Fighting for.
10: How the World Saw the War.
11: Joining the Ranks.
12: A Long Road to Equality.
13: Forever Free.
Glossary.
For More Information.
Index.