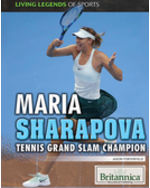 Maria Sharapova has enjoyed a long and successful career as one of the top women's tennis players in the world. The Russian-born superstar has held the Women's Tennis Association's top ranking five times, has won five Grand Slam titles, and competed in the 2012 Summer Olympics. Readers can follow her development as a player, from her early childhood in Soviet Russia to her teen years spent learning the sport in Florida. This lively text also describes her persistence in coming back from injuries and a doping scandal, as well as her many off-court business endeavors and charitable efforts.

Front Cover.
Title Page.
Copyright Page.
Contents.
Introduction.
1: Getting into the Game.
2: Education in Tennis.
3: Becoming the Best.
4: Off the Court.
Timeline.
Other Living Legends of Tennis.
Glossary.
For More Information.
Index.