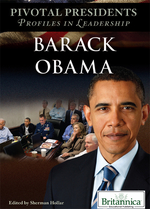 Sweeping into the office of U.S. president with his mesmerizing oratory of hope and change, Barack Obama forever transformed American politics. As the first African American to hold the title, his election represented a historic milestone, both socially and politically. The 44th president’s remarkable journey from Hawaii and Indonesia to Chicago and the White House is chronicled, and the major issues—including the financial crisis, healthcare, and foreign policy—that his administration has faced are examined.