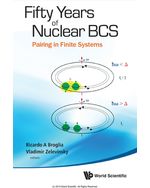 This unique volume reviews more than fifty years of theoretical and experimental developments of the concept that properties of atomic nuclei up to a great extent are defined by the pair correlations of nuclear constituents - protons and neutrons. Such correlations in condensed matter are responsible for quantum phenomena on a macroscopic level - superfluidity and superconductivity. After introducing Bardeen-Cooper-Schrieffer (BCS) theory of superconductivity of metals, it became clear that atomic nuclei have properties of superfluid drops, and practically all features of nuclei strongly depend on the pair correlations. Presenting a comprehensive overview of the progress of nuclear science, the contributions from leading physicists around the world, cover the whole spectrum of studies in nuclear physics and physics of other small systems. With the most updated information written in an accessible way, the volume will serve as an irreplaceable source of references covering many years of development and insight into several new problems at the frontiers of science. It will be useful not only for physicists working in nuclear and condensed matter physics, astrophysicists, chemists and historians of science, but will also help students understand the current status and perspectives for the future.