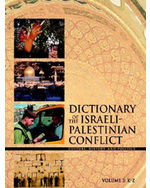 The often-violent conflict between the state of Israel and the displaced Palestinian people occupies newspaper headlines and television news every day. Despite such coverage, many people still understand very little about the cause of this all but undeclared war. Untenable promises of former colonizers, access to water, and religious and cultural traditions as entwined as they are distinct have all contributed to what is arguably the greatest global problem of our time. The Dictionary Of The Israeli-Palestinian Conflict covers the history of the conflict, going back to the birth of Zionism at the end of the 19th century. The two-volume set covers five Arab-Israeli wars, and provides biographies of political personnel in Syria, Egypt, Iraq, Lebanon, Jordan, and the occupied territories. The Dictionary provides clear definitions and comprehensive explanations of the elements at play---history, geography, religion, demographics, and more---and supports the acquisition of knowledge about this topic, not just dissemination of information. While Gale strives to replicate print content, some content may not be available due to rights restrictions. Call your Sales Rep for details.

"This set is recommended for academic, public, and personal libraries. People interested or concerned with the Middle East will want this set to keep up with the background to what is happening over there, especially now that what happens over there are now affecting us more here in the United States and the rest of the Western world." --www.curledup.com, October 2005

"From the first Zionist Conference to the death of Yasser Arafat, this guide to Arab-Israeli relations surveys more than a century of tensions and turmoil. The majority of its 1,140 entries detail the efforts of numerous individuals and groups to resolve the Palestinian question. These influential players include local politicians and religious leaders, European and American diplomats, political parties, movements, radical groups and international agencies. Other entries track the features of major agreements, United Nations resolutions, peace plans and treaties. Overviews of wars, events and surrounding nations provide the broader historical context for these documents. Cultural background is provided in hundreds of definitions of social and religious concepts. The arrangement is alphabetical, and numerous cross-references lead the reader to related articles. With its wider coverage of Israeli, Lebanese and Jordanian affairs, this guide complements Philip Mattar’s Encyclopedia of the Palestinians (Facts on File, 2000 and 2005). Based upon the French Shalom, Salam: Dictionaire pour une meilleure approche du conflit israélo-palestinien (Librarie Arthème Fayard, 2002), this guide was updated, rewritten and expanded with maps and illustrations. Other supporting materials include curiously separate chronologies of Arab-Israeli history and conflict, a glossary of Hebrew and Arabic terms and a select bibliography. In the absence of an index, a topically arranged list of entries would have been useful. Nonetheless, users in high school, public and college libraries will find this dictionary a helpful introduction to one of the world’s most intractable conflicts. --Reviewed by John Lawrence, Oneota Reading Journal, July 2005

"While the Israeli-Palestinian conflict may be ever prevalent in the media today, its origins remain understood by only a few. While some might date it from the beginning of Zionism at the end of the 19th century, in effect, it is much older than that. This region is the center of three major monotheistic religions with the same prophets and the same holy places, if one can accept their presently designated sites as the actual sites. Further, from a political standpoint, it is situated with strategic access to both Africa and Asia. Whether the causes are understood, the international repercussions are evident. These volumes cover the five Arab-Israeli wars and provide biographies of the political personnel in the adjoining countries of Syria, Egypt, Iraq, Lebanon and Jordan. Students will find clear definitions and comprehensive explanations of the history, geography, religion and demographics effecting this situation. The 10-page timeline found in both volumes begins with the first Jewish settlement in Palestine in 1878 and ends with Yasir Arafat's death in 2004. The six-page glossary is also found in both. While both U·X·L's Crusades Reference Library and ABC-CLIO's Ancient Canaan and Israel build background, this provides the modern day elements. This is a timely addition to the reference collection and, if your budget is smaller, you should check for joint purchase with your local public library." --Blanche Woolls, September 2005

"This is a reader-friendly and a reliable reference tool." --ARBA, March 2006