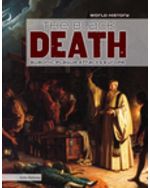 The Bubonic Plague terrorized Europe and North Africa in the 14th century, killing millions of people. Readers learn many fascinating facts about what became known as the Black Death. They discover that the cause of the disease was unknown for most of the epidemic, and many unlikely things were blamed, including bad smells and occult rituals. Detailed sidebars and a comprehensive timeline augment the compelling text as it examines how the disastrous events of the plague were exacerbated by peoples ignorance of scientific facts.

Front Cover.
Title Page.
Copyright Page.
Contents.
Foreword.
Setting the Scene: A Timeline.
Introduction: A Terrible Event in History.
1: Black Death Beginnings.
2: A Plague of Terror and Panic.
3: Black Death Facts.
4: Economic Effects of the Plague.
5: Impacts on Culture.
6: Epilogue: The Past and Present of the Plague.
Notes.
For More Information.
Index.
Picture Credits.
About the Author.