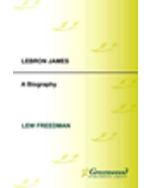 LeBron James is simultaneously on the cutting edge of basketball greatness and as a cultural icon. Through the international exposure of the NBA its televised games in more than 100 countries, and as a global marketing presence, the star of the Cleveland Cavaliers is rapidly becoming one of the world's most familiar faces. This biography traces the key events in the life of LeBron James from his dizzying rise to fame in high school to his emergence as the first overall pick in the NBA draft as an 18-year-old, to his carrying the underdog Cavaliers to the 2007 NBA Finals.

Hyped relentlessly from the time he was a high school sophomore in Ohio, James has lived up to all advance billing and with his charm, smile, and extraordinary basketball skills. James' all-around talent and unselfishness on the court are the trademarks of his play that have made him one of the most feared scorers in the league, but also one of its most versatile rebounders and passers. This biography offers a well-rounded portrait James from the difficulties encountered being raised by a single mother and overcoming poverty, which at times caused the family to move from home to home. Lew Freedman of the Chicago Tribune chronicles the milestones in the life of LeBron James during his dizzying rise to fame. Also highlighted are James' remarkable endorsement deals, particularly his $90 million deal with Nike. The volume is rounded out with a timeline and a bibliography of print and electronic sources to provide suggested readings for students and sports fans alike.