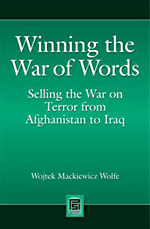 Winning the War of Words: Selling the War on Terror from Afghanistan to Iraq, 1st Edition

Mining public opinion data and nearly 1500 presidential speeches over a four-year period, the book argues that presidential framing of threats and losses, not gains, contributed to public support for war in Afghanistan, war in Iraq, and President Bush's successful reelection campaign. President Bush's initial framing of the terrorist threat was introduced immediately after the September 11 attacks and reinforced throughout the Afghanistan invasion. During this time period, presidential threat-framing established the broad parameters for the War on Terror and enabled the president to successfully market a punitive war in Afghanistan. Second, the president marketed the strategy of preemptive war and led the country into the more costly war in Iraq by focusing on the potentially global threat of terrorism and the proliferation of Weapons of Mass Destruction.

President Bush's previous war rhetoric was repackaged into a leaner, more focused format in which the Iraq war became part of the War on Terror, resulting in increased support for the president and a successful reelection campaign. Finally, the author examines the withdraw versus surge in Iraq debate bringing the book up to date. The book shows the influencing potential of presidential spin and of risky foreign policy in the Middle East, and presents a systematic analysis of how a president effectively pursued a marketing strategy that continues to show an enduring ability to influence public support. Even two years after the Iraq invasion, 52 percent of Americans believed that the U.S. should stay in Iraq until it is stabilized. This finding bypasses agenda-setting explanations, which prescribe issue salience amongst the public for only one year. The large speech database available with the study will also be an added benefit to scholars seeking to teach undergraduate- and graduate-level qualitative research methods.