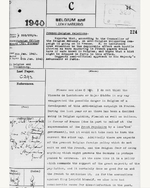 Selected from the PRO Class FO 371 files in the National Archives, London, Conditions and Politics in Occupied Western Europe, 1940-1945 features full-text documents received in the British Foreign Office from all European states under Nazi occupation during World War II. This unique collection includes a range of primary sources related to wartime conditions in France, Italy, Belgium, Sweden, Norway, Denmark, the Netherlands, Luxembourg and the Vatican, in addition to those from Spain and Germany itself. Subjects covered include: the German attempt to win over important groups within the territories; the psychological warfare of rival propaganda campaigns; resistance units; and the repercussions of such events as Germany's invasion of Russia. More than 200,000 pages of material in this indispensable collection aid in the study of the historical, social, political and economic conditions in war-torn Europe.