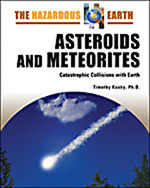 Asteroids and comets are space objects that orbit the Sun. When they enter the Earth’s atmosphere, they often make a streak of light known as a meteor, and if they are not burned up in the atmosphere, the remaining rocky or metallic body forms a meteorite.

Asteroids and Meteorites examines the many craters on Earth that have formed as a result of meteorites or asteroids crashing into the planet, excavating huge holes and wreaking widespread destruction on the landscape. Readers will gain an understanding of the origin of asteroids, meteorites, and comets, including where they are located in the solar system and different models for their origin. Coverage also includes the physical processes that occur during the impact of these objects with the Earth along with the specific hazards associated with large and small impacts such as earthquakes, giant tsunamis, and global firestorms. Loaded with black-and-white photographs and line illustrations, as well as an index, glossary, sidebars, and further reading, this comprehensive resource is essential for middle and high school students.