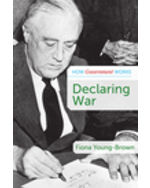 The Constitution sets forth clear guidelines that must be followed for the United States to declare war on another nation. However, in the centuries since the Constitution was written, the nature of the world and war have changed drastically. This book contextualizes some of the conflicts in American history, from the last declaration of war for World War II to the conflicts of Vietnam through to Iraq and Afghanistan. It investigates how Congress and the president have historically followed the rules, how those rules have evolved, and how citizens and politicians influence the process of declaring war. This resource closely aligns with the objectives of the C3 Framework for Social Studies State Standards.

Front Cover.
Title Page.
Copyright Page.
Contents.
1: What Is a Declaration of War?.
2: Who Declares War?.
3: The Process of Declaring War.
4: What Happens Next?.
Glossary.
Further Information.
Bibliography.
Index.
About the Author.