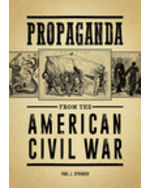 This illuminating reference contains excerpts from propaganda generated during the American Civil War, as well as contextual analysis to assist readers in understanding its utility, importance, and effect. It includes written arguments, staged photographs, and political cartoons, all of which were used to advance one side's objectives while undermining the enemy's. It offers an understanding of each side’s underlying arguments as well as their willingness to distort the truth for political, military, or economic advantage. Organized chronologically, the book explains how propaganda was developed and expanded throughout the war. Chapters are dedicated to each of the war years (1861-1865) and the antebellum and postwar periods. Each document includes an analysis of the significance and effectiveness of the piece and guides readers to examine it with a critical eye. Original source documents remain as written, including spelling errors and other aspects of 19th-century communication.