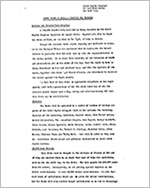 Fight for Racial Justice and the Civil Rights Congress

The Civil Rights Congress (CRC) was a civil rights organization formed in 1946 by a merger of the International Labor Defense and the National Federation for Constitutional Liberties. It became known for involvement in civil rights cases such as the Trenton Six and justice for Isaiah Nixon. The CRC also held multiple high profile protests in Washington DC and at the UN. Due to its Communist Party affiliations, the CRC was cited as subversive and communist by U.S. President Harry S. Truman's Attorney General Thomas Clark. This collection comprises the Legal Case and Communist Party files of the Civil Rights Congress, documenting the many issues and litigation in which the CRC was involved during its 10-year existence. These papers provide valuable insight on the activities of the Civil Rights Congress, most notably in cases involving civil rights and civil liberties issues, such as those of Willie McGee (Mississippi), Rosa Lee Ingram (Georgia), Paul Washington (Louisiana), Robert Wesley Wells (California), the Trenton Six (New Jersey), the Martinsville Seven (Virginia), and many others.