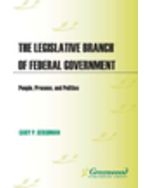 In just the past decade, the U.S. Congress has pursued investigations and impeachment, overhauled welfare and Medicare, declared war, wrestled with ethics issues, worked in bipartisan spirit and dissolved in partisan rancor. And in this media age, the inner workings (and very different styles) of the House and Senate have been exposed to the public like never before.

Spanning the history of the federal system of government of the United States, The Legislative Branch of Federal Government: People, Process, and Politics looks at the evolution of the U.S. Congress over the past 225-plus years, then describes its current structure, responsibilities, and daily operations.

Readers will learn how congressional powers have changed with different interpretations of the Constitution, how a colorful gallery of power brokers (famous and infamous) made its mark, and how politics (both electoral and within the Capitol) affects legislation, oversight efforts, and other actions. The volume includes a "mini-pedia" of alphabetically organized entries and the concluding chapter highlights some fascinating examples of interactions between Congress and the other branches of federal government.