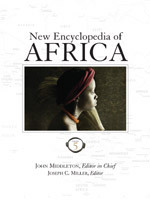 This substantial expansion and reworking of the classic Encyclopedia of Africa South of the Sahara (1997) covers the entire continent, from the Europe-facing shores of the Mediterranean to the commercial bustle of Cape Town. The set addresses the entire history of African cultures from the pharaohs and the ancient civilizations of the south through the colonial era to the emergence of 53 independent countries, some of them, like Nigeria, newly emergent in world commerce and others deep in conflict (Sudan, Liberia, Congo). The NEA treats today's African peoples not as the obscure "other" of a "Dark Continent" but as actors on a world stage where issues of global development, the AIDS crisis, and international terrorism play out across a map of indigenous cultures functioning beneath an imperfect European overlay of "national states." Articles in anthropology, geography, history, and cultural studies by an international team of more than 600 distinguished Africanists (including over 150 from Africa and the African Diaspora) present Africa – as seen by Africans themselves.

Features hundreds of photographs, including five color inserts, plus maps, thematic outline, chronology, and appendix of ethnic and identity groups.

"Scribner's Encyclopedia of Africa South of the Sahara was a welcome and much-needed work when it was released a decade ago. It assembled in four volumes a wealth of knowledge about Africa from the perspective of historians who studied the continent closely and intensively. Compiled by the original collaborators, this set is an effort to replicate, rework, and expand on that fine resource. Middleton (Yale) and Miller (Univ. of Virginia) have gathered a great group of contributors to provide coherent and focused content, which results in a set that is more contemporaneous and reflective of the global integration that Africa has undergone since 1997. The more than 1200 A-to-Z entries (of which 600 are completely new) are detailed and multidisciplinary in scope, the maps scattered throughout are useful, and the abundant images give readers a real feel for the continent and its people, history, and life. Especially helpful are an appendix delineating ethnic and identity groups, a directory of contributors, a thematic outline of contents, and an elaborate index. BOTTOM LINE Rather than focusing on the African diaspora like Anthony Appiah and Henry Louis Gates's Africana: The Encyclopedia of the African and African American Experience, this set focuses exclusively on Africa. An impressive update of an already impressive resource, it is recommended for all public and academic libraries." --Library Journal, February 15, 2008

John Middleton's survey of Africa remains the best all-round guide to the continent and its peoples. His revised classic will prove equally useful to high school, public and academic libraries." --Lawrence Looks at Books, February 2008

"This encyclopedia depicts a little-understood continent with its unique blend of traditional and modern influences. It is a timely reference given Africa's pivotal role in today's current events." --ARBA, 2008

"this encyclopedia is unique in its field; larger libraries may need it where Africa is an area of cencentration." --School Library Journal, April 2008

"When Scribner published Encyclopedia of Africa South of the Sahara 10 years ago, it was intended to be the standard reference source on its subject. Its successor, New Encyclopedia of Africa, encompasses the entire continent, as well as the many changes that have occurred since 1997. --Booklist, January 2008

"Detailing the ever-changing status of the vast African continent, this comprehensive encyclopedia provides informational, well-written articles that not only give facts, but also provide insight into the events and people that have made these changes occur. Researchers will find this set extremely useful." --Library Media Connection, August/September 2008

"This encyclopedia depicts a little-understood continent with its unique blend of traditional and modern influences. It is a timely reference given Africa's pivotal role in today's current events." --ARBA, March 2009

"Each entry includes cross-references and short bibliographies. Included alongside the entries are some 650 maps, diagrams, portraits, photographs, and tables and each volume includes an eight-page color insert. Three appendices include information on the chronology of Africa, the periodization of history used in the encyclopedia, and around 1000 selected ethnic groups of the African continent. A general index is included in the final volume." --Reference & Research Book News, February 2008

"Numerous maps, illustrations, and a chronology of African history make this the richest source of information on the continent." --Library Journal, April 15, 2009