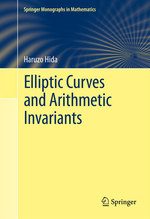 This book contains a detailed account of the result of the author's recent Annals paper and JAMS paper on arithmetic invariant, including μ-invariant, L-invariant, and similar topics.   This book can be regarded as an introductory text to the author's previous book p-Adic Automorphic Forms on Shimura Varieties.  Written as a down-to-earth introduction to Shimura varieties, this text includes many examples and applications of the theory that provide motivation for the reader.  Since it is limited to modular curves and the corresponding Shimura varieties, this book is not only a great resource for experts in the field, but it is also accessible to advanced graduate students studying number theory.  Key topics include non-triviality of arithmetic invariants and special values of L-functions; elliptic curves over complex and p-adic fields; Hecke algebras; scheme theory; elliptic and modular curves over rings; and Shimura curves.