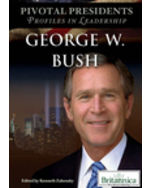 George W. Bush emerged from his father’s shadow and in 2000 was elected US president, the first since 1888 to be elected despite losing the popular vote. Readers will examine his two terms and their many challenges, including the terrorist attacks of September 11, 2001. He pushed for expanded powers and launched a war on terrorism and the US-led invasion of Iraq. Despite many setbacks in his domestic agenda, he initiated a program to address the HIV/AIDS pandemic in Africa and the Caribbean and appointed two justices to the Supreme Court.