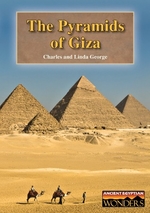 Massive stone monuments that date back more than four thousand years stand alongside the Nile near modern-day Cairo, Egypt. The pyramids on the Giza Plateau are some of the oldest and largest man-made structures on Earth, and they have mystified humanity for millennia. Who built them, why they were built, and especially how they were built have long puzzled scholars. Today, many of the pyramids’ mysteries have been solved, but how a civilization without the wheel or large beasts of burden was able to accomplish such engineering masterpieces is still a matter of debate. This book presents the latest research into these stone giants.

Front Cover.
Copyright Page.
Contents.
A Timeline of Ancient Egypt.
Introduction: The Search for Eternity.
1: Evolution of the Giza Pyramids.
The Sed Festival.
More than Just a Pyramid.
2: Pyramids and the Afterlife.
Opening of the Mouth Ceremony.
Fit to be Buried.
3: Stone by Stone.
Khafre’s Pyramid.
Moving the Stones.
4: In and Around the Pyramids.
Secret Shafts in the Great Pyramid.
Fanciful Construction Theories.
5: By the Sweat of Their Brows.
Leisure Activities for the Pyramid Builders.
The Lost City Galleries.
Source Notes.
For Further Research.
Index.
Picture Credits.
About the Authors.