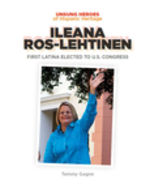 Few people would have thought that Ileana Ros-Lehtinen would grow up to become one of the longest serving members of the United States House of Representatives. Throughout her career, this groundbreaking congresswoman has worked to advocate for women, education for all, veterans, LGBTQ rights, and marriage equality. She was the first Latina, the first female Florida Republican, and the first Cuban-born person to serve in the United States Congress. Ileana Ros-Lehtinen led the way for other women in public office. Open this book to read about this icon who helped to shape the United States.