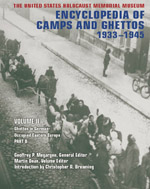 Created by the Center for Advanced Holocaust Studies at the UNITED STATES HOLOCAUST MEMORIAL MUSEUM ENCYCLOPEDIA, the monumental 7-volume encyclopaedia that the present work inaugurates will make available - in one place for the first time - detailed information about the universe of camps, sub-camps, and ghettos established and operated by the Nazis - altogether some 20,000 sites, from Norway to North Africa and from France to Russia. This volume covers three groups of camps: the early camps established in the first year of Hitler's rule, the major concentration camps with their constellations of sub-camps that operated under the control of the SS-Business Administration Main Office, and youth camps. Overview essays precede entries on individual camps and sub-camps. Each entry provides basic information about the purpose of the site; the prisoners, guards, working and living conditions; and key events in its history. Material drawn from personal testimonies helps convey the character of each site, while source citations for each entry provide a path to additional information.