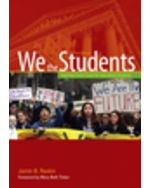 We the Students, 1st Edition

This unique reference has introduced countless students to the field of legal studies by studying Supreme Court issues that directly affect young people. For this third edition, CQ Press worked directly with educators to retain the best features of the previous editions while updating and further refining the material, including a significantly expanded treatment of Equal Protection and discrimination. The book's freshly updated design facilitates student comprehension with new features such as legal definitions in the margin, a "Dissenting Voices" section to provide context for minority judicial opinions, new exercises, and much more.

Front Cover.
Title Page.
Copyright Page.
Contents.
Preface.
Foreword.
1: “We the People”: Our Constitution and Courts.
2: Why a Constitution?.
3: The American Constitution: What Is It?.
4: The Constitution: Whose Is It?.
5: The Constitution: What Does It Mean?.
6: Federalism: How the States Share the Power.
7: The Incorporation of the Bill of Rights.
8: The State Action Requirement.
9: Judicial Architecture: How Our Court System Works.
10: Majority and Dissenting Opinions.
11: How to Brief a Case.
12: Voices and Choices: The First Amendment and Student Speech.
13: Expressive Conduct and the Right Not to Speak.
14: The Right to Speak Freely and Protest (But Not to Disrupt).
15: The Confederate Flag and Other Racially Provocative Symbols.
16: Hirsute Lawsuit: Do Boys Have the Right to Wear Long Hair?.
17: Double Entendres and Double Standards: Lewd and Suggestive Language in a Student Government Campaign Speech.
18: Coed Naked Civil Liberties.
19: “Bong Hits 4 Jesus”: Testing the Limits of Free Speech.
20: Thought Control or Quality Control? The Problem of Library Book Removal.
21: Viewpoint Neutrality and Religious Speech: Good News for the Free Speech Rights of Religious Americans.
22: Freedom of the Student Press: All the News the School Sees Fit to Print.
23: Freedom of the Student Press in Official School-Sponsored Activities.
24: Squelching Debate: A Different Sort of Blair Witch-Hunt.
25: Cyber Censors: Rising Conflicts Over Internet Homepages.
26: The Wall of Separation between Church and School.
27: Freedom from Establishment of Religion at School.
28: Graduating from Invocation and Benediction.
29: Government Aid to Private Religious Schools: When Does It Cross the Line?.
30: School Vouchers: Making Education Redeemable in Secular or Religious Schools.
31: The First Amendment and the Ten Commandments.
32: Season's Greetings! The Court's Agonizing Ambivalence over Christmas Nativity Displays.
33: One Nation, under Canada, with Constitutional Controversy for All: New Conflict Over the Pledge of Allegiance.
34: The Supreme Court's Curious Response to Newdow v. U.S. Congress.
35: The Free Exercise Rights of Religious Americans.
36: The Theory of Evolution and the Story of Creation: An Ongoing Duel in the Classroom.
37: The Fourth Amendment: Searching the Student Body.
38: Reduced Privacy Rights at School.
39: A Fluid Analysis of the Fourth Amendment: Drug Tests and Extracurricular Activities.
40: Strip Searches.
41: Locker Searches and Drug-Sniffing Dogs.
42: Metal Detectors and the Constitution.
43: The Constitution and Student Discipline: “Due Process” and “Cruel and Unusual Punishment” at School.
44: Due Process.
45: The Crime of Hanging Out with Gang Members: “Loitering with No Apparent Purpose” in Chicago and the Due Process Clause.
46: Corporal Punishment.
47: Corporal Punishment in the Aftermath of Ingraham v. Wright.
48: Equal Protection Against Race Discrimination: From Segregation to Multicultural Democracy.
49: The Persistent Legacy of Slavery and Racism.
50: Two Steps Forward, One Step Back: “Massive Resistance” and the Reaction to Brown.
51: The Right to Love.
52: Can Public Schools Deliberately Integrate Students Today?.
53: Race and Ethnicity in College and Graduate School Admissions: Affirmative Action or “Reverse Discrimination”?.
54: The Other Lines We Draw At School: Wealth, Gender, Citizenship, and Sexual Orientation.
55: Rich Schools, Poor Schools: The Court's Treatment of “Separate But Equal” School Financing.
56: “Suspect” Classes and Gender-Based Segregation.
57: Boys and Girls Equal: Title IX.
58: Separating Citizens from Noncitizens Under the Law.
59: Discrimination Against Gays and Lesbians.
60: Harassment in the Hallways: Sexual Harassment, Bullying, and the Law.
61: When Teachers Harass Students.
62: When Students Harass Students.
63: The Rights of Gay and Lesbian Students Against Harassment.
64: A Healthy Student Body: Disability, Privacy, Pregnancy, and Sexuality.
65: The Rights of the “Differently Abled” under the Individuals with Disabilities Education Act.
66: Peer Grading and the Right to Privacy.
67: Three Trimesters: Pregnant at School.
68: Abortion and the Privacy Rights of Teenagers.
Supreme Court Confirmation Exercise: You Be the Judge.
Constitution of the United States.
Glossary.
Bibliography.
The Marshall-Brennan Constitutional Literacy Project.
Photo Credits.
Index.