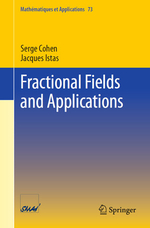 This book focuses mainly on fractional Brownian fields and their extensions. It has been used to teach graduate students at Grenoble and Toulouse's Universities. It is as self-contained as possible and contains numerous exercises, with solutions in an appendix. After a foreword by Stéphane Jaffard, a long first chapter is devoted to classical results from stochastic fields and fractal analysis. A central notion throughout this book is self-similarity, which is dealt with in a second chapter with a particular emphasis on the celebrated Gaussian self-similar fields, called fractional Brownian fields after Mandelbrot and Van Ness's seminal paper. Fundamental properties of fractional Brownian fields are then stated and proved. The second central notion of this book is the so-called local asymptotic self-similarity (in short lass), which is a local version of self-similarity, defined in the third chapter. A lengthy study is devoted to lass fields with finite variance. Among these lass fields, we find both Gaussian fields and non-Gaussian fields, called Lévy fields. The Lévy fields can be viewed as bridges between fractional Brownian fields and stable self-similar fields. A further key issue concerns the identification of fractional parameters. This is the raison d'être of the statistics chapter, where generalized quadratic variations methods are mainly used for estimating fractional parameters. Last but not least, the simulation is addressed in the last chapter. Unlike the previous issues, the simulation of fractional fields is still an area of ongoing research. The algorithms presented in this chapter are efficient but do not claim to close the debate.