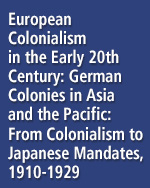 European Colonialism in the Early 20th Century: German Colonies in Asia and the Pacific: From Colonialism to Japanese Mandates, 1910-1929

German Colonial aspirations in Asia and the Pacific ended with the start of the First World War. Japanese Army forces seized German leased territories in China and the Japanese naval forces occupied the German Pacific colonies. The Treaty of Versailles legitimized Japan’s aggression and the territories were officially mandated to the Japanese government. This collection comprises correspondence, studies and reports, cables, maps, and other kinds of documents related to U.S. consular activities. U.S. Consulates were listening posts reporting on the activities of the German colonial governments and later the Japanese mandate authorities, and the activities of the native peoples.