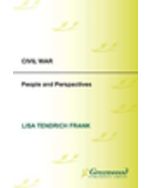 The Civil War claimed more American lives than the Revolutionary War, World Wars I and II, the War of 1812, and the Vietnam War combined. It involved many different groups of citizens, including women, who dressed as men in order to fight, and Native Americans, some of whom fought their own civil wars at the same time. Their unique perspectives all played a role in shaping a nation struggling to define itself.

Civil War: People and Perspectives looks at one of the most convulsive events in American history through the eyes of ordinary citizens, examining issues related to the home front and war front across the full spectrum of racial, class, and gender boundaries.

Moving away from the traditional focus on famous political and military figures, this insightful volume recounts the experiences of soldiers, women and children, slaves and freed persons, Native Americans, immigrants, and other social groups during a time of extraordinary national upheaval. It is a revealing look at how the lives of everyday people -- Northern and Southern, black and white, rich and poor, male and female, enslaved and free -- shaped and were shaped by the American Civil War.