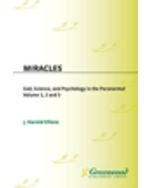 Miracles: God, Science, and Psychology in the Paranormal, 1st Edition

Can science, psychology and biology explain miracles? This three-volume set attempts to answer that question, presenting the latest, as well as classic, thinking and research regarding miracles from fields that include psychology, psychiatry, theology, biology and history.

From news of a crippled woman who left her wheelchair and walked after an evangelist prayed over her, to stories of people who died on the operating table only to be revived to tell of bright lights and the pathway to the afterlife, we've all heard of what seem miraculous events. They have surfaced across history. They range from stigmata and bleeding icons to deadly tumors that disappear, and healers who succeed just by laying hands on the afflicted; from people who can predict unexpected events to so-called mediums and those who can allegedly see and speak with the dead. Some miracles are intricately tied to religious beliefs, but there are millions of people who ascribe to no particular religion, yet still believe that things happen that defy all laws of nature, and thus defy scientific explanation.

Front Cover.
Half Title Page.
Recent Titles in Psychology, Religion, and Spirituality.
Title Page.
Copyright Page.
Dedication.
Other Frontmatter.
Contents.
Series Foreword.
Introduction.
1: Biblical Miracles and Psychological Process: Jesus as Psychotherapist.
2: Distorted Reality or Transitional Space? Biblical miracle Stories in Psychoanalytic Perspective.
3: Jesus and Miracles in Historical, Biblical, and Psychological Perspective.
4: Miracles in the Old Testament.
5: Old Testament Figures as Miracle Workers.
6: Moses' Competitionith Pharaoh's Magicians.
7: The Religious-Historical Background of the New Testament Miracles.
8: The Miracle of Christ's Birth.
9: “That They May Believe”: Distinguishing the Miraculous from the Providential.
10: Through Signs and Wonders: Religious Discourse and Miracle Narratives.
11: Healing in the Gospels: The Essential Credentials.
12: What We Can Learn from Miraculous Healings and Cures.
13: Are Miracles Essential or Peripheral to Faith Traditions?.
14: Religious and Spiritual Miracle Events in Real-Life Experience.
15: How Religious or Spiritual Miracle Events Happen Today.
16: On the Limits of Scientific Investigation: Miracles and Intercessory Prayer.
Conclusion.
Index Volume 1.
About the Editor and Advisers.
About the Contributors.