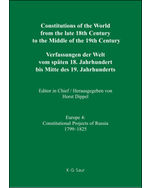 Constitutions of the World from the late 18th Century to the Middle of the 19th Century: Constitutional Projects of Russia 1799-1825, 1st Edition

Constitutions of the World from the late 18th Century to the Middle of the 19th Century, with its estimated two dozen volumes,is the most complete and academically thorough collection of its kind. It contains constitutional documents, written and spread all over the world,from 1776 to the end of the year 1849.

The complete edition is of unique value, because it makes all constitutions, from the early phase of modern constitutionalism, accessible in a reliable, authentic text version, for the first time. Until now, these constitutions were scattered widely and many were unknown. Constitutions of the World from the late 18th Century to the Middle of the 19th Century is a unique and fundamental source edition and an extensive documentation of constitutional history.