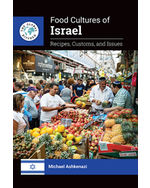 The evolution of Israeli food has been dependent on three major variables: the geography and climate of Israel, its ethnic mix and ethnic history (including religious influences, non-Jewish communities, and heavy immigration from around the world), and technical innovation that has enabled Israel to become a leader in agricultural technology. This book provides a comprehensive picture of 21st century Israeli food culture, based on various cultural influences, such as the lengthy food history that can be traced to prehistory, including data from the Bible, Koran, and archaeological evidence, and contemporary food practices that have emerged from ethnic group influences. Modern Israeli food practices are the result of the sway of European, Middle Eastern, and other cultures, creating a cuisine marked by its blends. Including main topics accompanied by recipes, the book serves as an introduction to daily life as well as the evolution of food practices in a relatively new country.