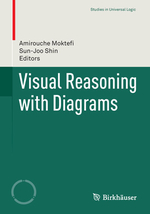 Logic, the discipline that explores valid reasoning, does not need to be limited to a specific form of representation but should include any form as long as it allows us to draw sound conclusions from given information. The use of diagrams has a long but unequal history in logic: The golden age of diagrammatic logic of the 19th century thanks to Euler and Venn diagrams was followed by the early 20th century's symbolization of modern logic by Frege and Russell. Recently, we have been witnessing a revival of interest in diagrams from various disciplines - mathematics, logic, philosophy, cognitive science, and computer science. This book aims to provide a space for this newly debated topic - the logical status of diagrams - in order to advance the goal of universal logic by exploring common and/or unique features of visual reasoning.

Front Cover.
Other Frontmatter.
Other Frontmatter.
Title Page.
Copyright Page.
Preface.
Contents.
1: What Is a Logical Diagram?.
2: The Geometry of Diagrams and the Logic of Syllogisms.
3: A Diagrammatic Calculus of Syllogisms.
4: Beyond Syllogisms: Carroll's (Marked) Quadriliteral Diagram.
5: A Diagrammatic Bridge between Standard and Non-Standard Logics: The Numerical Segment.
6: Diagrammatic Reasoning with Classes and Relationships.
7: On the Completeness of Spider Diagrams Augmented with Constants.
8: A Practice-Based Approach to Diagrams.
9: Figures, Formulae, and Functors.
10: Representation of Graphs in Diagrams of Graph Theory.